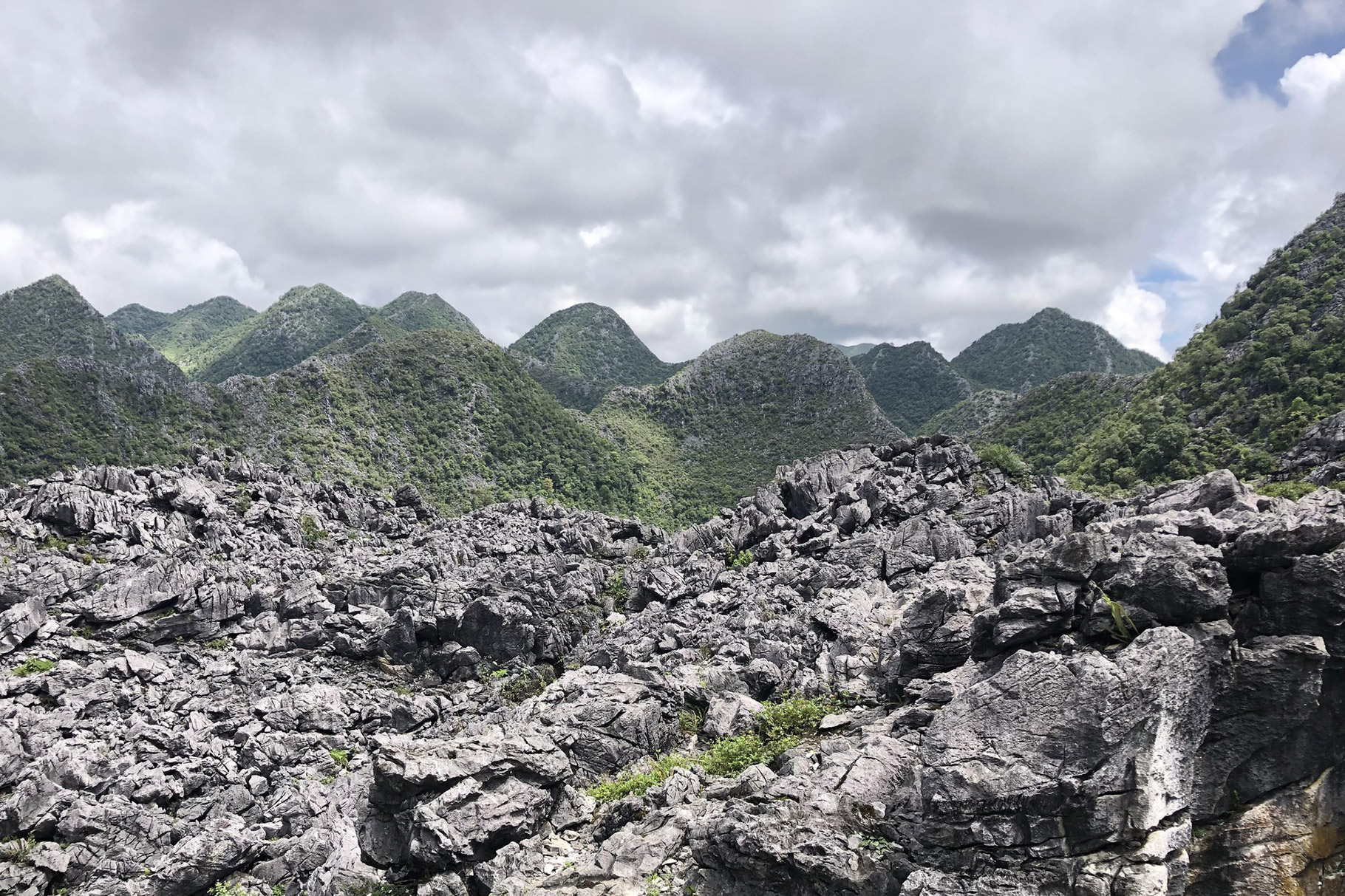 Everything About the Buckwheat Flower Season in Ha Giang

Ha Giang is known as the most beautiful place in Northern Vietnam. This province with its forested limestone and granite mountains, caves and gorgeous rivers, and tiny settlements, borders China. This province is as picturesque as can be. There are so many things to see in this stunningly scenic province – not only is it mountainous literally everywhere but some noted places are Ma Pi Leng Pass, Dong Van Plateau, and Hoang Su Phi. Quan Ba Pass, known for its panoramic views over terraced rice fields below, is located only 50 kilometers from the capital city of Ha Giang, also named Ha Giang. But this blog is not about the province itself. You can expect one later, but right now I am focusing on something special about Ha Giang – buckwheat flowers (Tam Giac Mach in Vietnamese). This will be your all-you-need-to-know about the buckwheat flower season in Ha Giang! What Are Buckwheat Flowers?

They say that buckwheat blossoms, or “chez” as known by the H’mong (a local hill tribe of the North), are the specialty of the northernmost land, because every year, just when the first monsoon starts blowing, these tiny white flowers simultaneously flourish, flooding the whole rocky plateau. Carrying a legend that not everyone knows, buckwheat flowers adorn what we in Vietnam call “cat ear-shaped” stones with warm incarnadine, inviting the nomads to discover such captivating beauty. 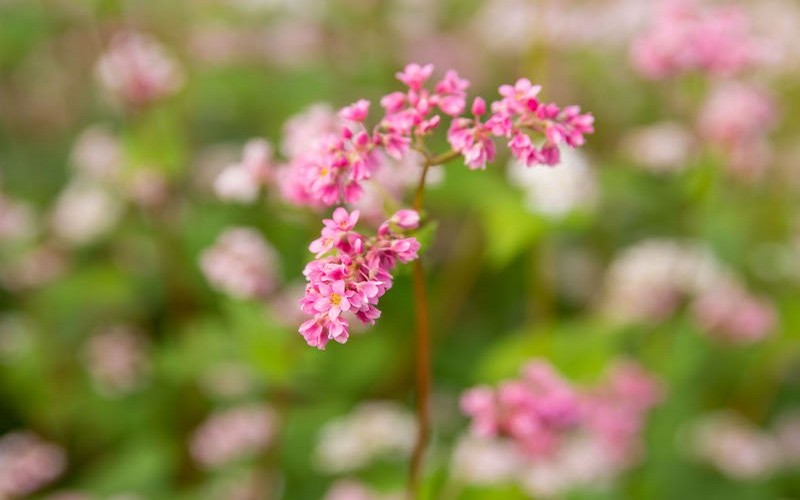 There are two types of buckwheat flowers. In areas of Cao Bang, you can find the white buds. Meanwhile, in Ha Giang, people often plant the purple buckwheat flower. Simple but loveable, modest but charming, buckwheat is harmonious with the green color of the forest and the grey color of the mountains which together creates an endless source of inspiration for art enthusiasts. But the most profound and beautiful feature of the flower is its meaning – slender in shape but full of energy and beauty, always overcoming the fierce challenges of nature. As autumn reaches its end, the flowers become more splendid and attractive. With time, they will start to change color from white to purple-pink, and finally dark red.

The white one is usually grown in several areas of Cao Bang. Meanwhile in Ha Giang, people often plant the purple buckwheat flower.

Buckwheat is often considered a tasty and healthier alternative to wheat. When harvested, the crops can be ground into flour and many parts of the world do this, such as India, Japan, and Korea. Rice, porridge, noodles, bread, pancakes, cookies, cakes, can all be made from buckwheat flour. The young buckwheat flower stem can also be boiled and used as vegetables, or it can be cooked with wine and corn to brew a very unique type of wine. It also has medicinal benefits and is sometimes used in cattle feed.

The flowers of the buckwheat plant have a pleasant fragrance and taste quite malty and earthy. The flowers are used for manufacturing dark brown-colored honey that is quite strong in flavor.

Buckwheat has many nutritional benefits and is a good source of high-quality protein that is easy to digest. The buckwheat starch acts as fat in processed foods, which is why it is used in baking. The benefits go on. It lowers blood pressure as it is a good source of rutin, it’s non-allergenic (stuffed into pillows to help cure dust, feather, and pollen allergies), helps manage diabetes, it’s good for digestion, it’s gluten-free, reduces cholesterol, lowers blood sugar levels, protects against breast cancer, benefits the skin and hair, among many other things. If you are curious to know about more health benefits of the buckwheat flower, click here.

The History of Buckwheat Flower Season in Ha Giang 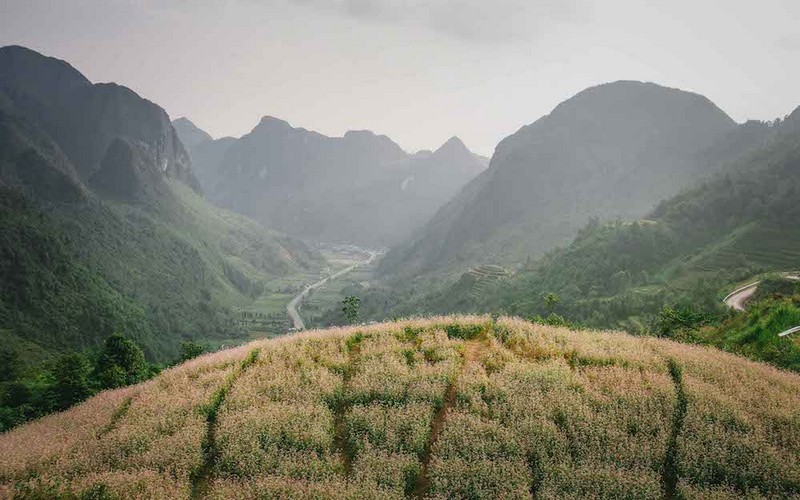 It is said that this tiny flower forest with green leaves once saved a whole village from a severe famine that occurred when the old harvest season ended way before the new one arrived.

According to the legend, in the past, the people in the Northern mountainous region lived mainly on rice and corn. One year, the food ran out and the land became barren, and the local people had to wander in search of food. Then, a strange yet pleasant fragrance filled the atmosphere and attracted the peasants to a ravine. Among the rocks, they discovered small white-pink flowers whose nuts tasted as subtle as rice and corn. Since then, the Hmong have used the buckwheat nuts as staples like maize and rice. The buckwheat flower then became an essential part of their daily lives.

When to Visit Ha Giang for the Buckwheat Flower Season

If you set foot in Ha Giang at the end of autumn (September to November) and even December, you will have a chance to experience the magic of the dreamy pink buckwheat fields stretching across the hills. From Ha Giang town, the Happiness road will lead you to the land of buckwheat flowers. The Dong Van Highland blooms with buckwheat flowers during November and December, over the mountainside, across villages and fields, passing through the legendary Ma Pi Leng saddle, creating a plateau of pink color. The beauty of nature, climate, and ecology all together bring soothing emotions and relaxation in the heart of visitors. It is a romantic escape, even for those who deem themselves non-romantic.

The Best Places to see the Buckwheat Fields in Ha Giang 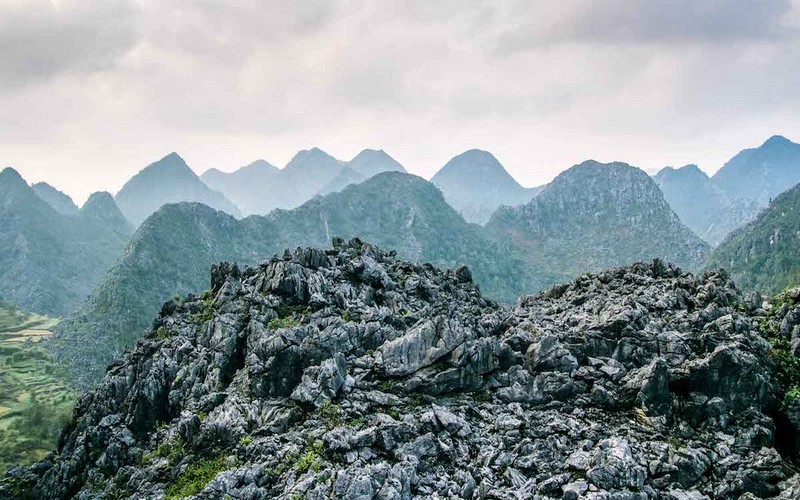 Thach Son Than (Quyet Tien town, Quan Ba District): the buckwheat fields are on the road to Quan Ba, about three kilometers from Bac Sum hill. This place offers adorable swings as well as lovely miniature houses and other decorative items to photograph. Newly married couples often flock to this location to enjoy the heart-touching moments with the gorgeous color of the buckwheat flowers. Ticket price: 10,000 VND/ticket.

I seriously can’t get enough…

Lung Cam Cultural Village (Sung La-Dong Van Valley): This is where you can see the most flowers. It is also the best place to fully immerse yourself in the beauty of buckwheat flowers. In addition, Sung La also has the house of Pao and many fascinating rose gardens. 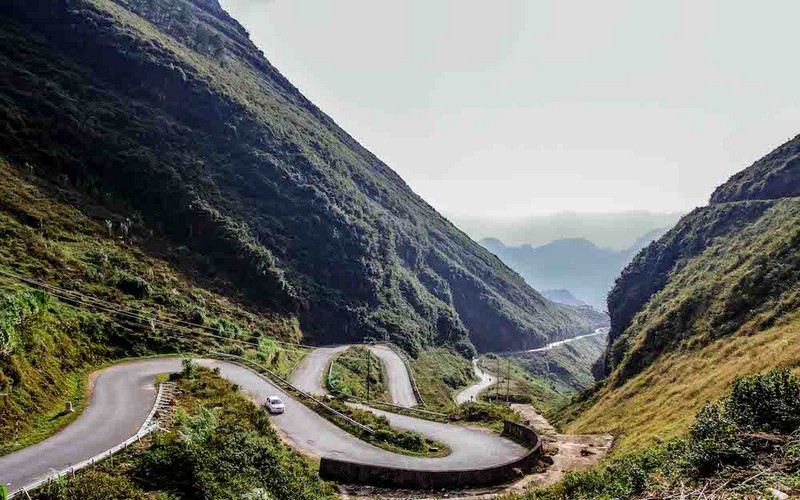 The field under the Lung Cu Flagpole: At the foot of Lung Cu flagpole you can find many buckwheat flowers. The flowers are grown in extremely eye-catching terraced fields giving tourists the most unforgettable scene of their life.

Fun fact: The Lung Cu flagpole marks the extreme North of Vietnam. This northernmost point marks the border between China and Vietnam.

Some Tips and Tricks for Newcomers to Ha Giang

Trust me, it could be your biggest regret to miss a chance to watch one of the most romantic spectacles of the year. Come to Ha Giang, embrace the beautiful white and pink gowns of buckwheat flowers and let your soul free. Let us know when you fall in love with the place. 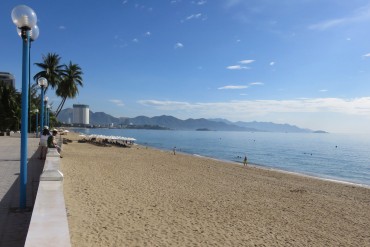 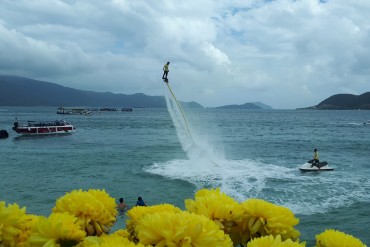 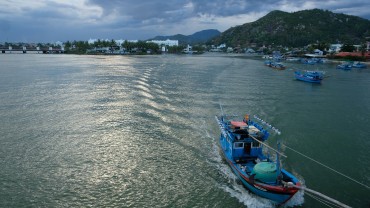 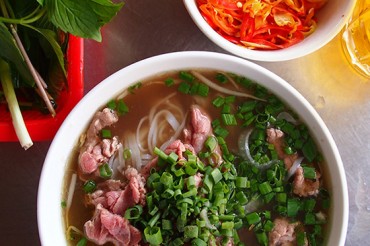 Hanoi After Dark: The Ultimate Guide to Nightlife in Hanoi 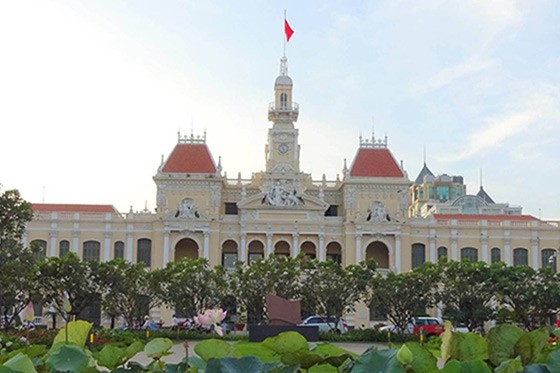 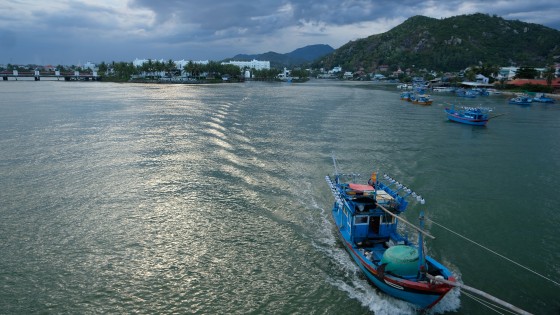 If you just stop by Nha Trang for only 1 day before leaving to next destination, here will be some of your recommendations to explore this interesting city!